We wish you a merry Christmas and a happy New Year!

My dear relatives, aquaintances and friends,

Do it like God: Become (hu)man! It is indeed not easy to be a (hu)man. Our human weaknesses impede our humanity, because where humans are they are human. Nobody can be more inhumane than man! Man has done everything humanly possible in man's living memory to dehumanise mankind. I just hope that my pessimistic view of humanity does not make you despise mankind. When we as humans talk about being human we are seldom humane. My pun about humanity has unfortunately a serious background. There is a lot of truth in it and we often complain how inhumane man is to mankind. The Good Lord really put himself in a spot, when he became man himself, not because he had made a mistake and then wondered where he was. No, God knew exactly how godforsaken mankind was and because he had made the masterpiece of his creation similar to himself, because he had created himself, the divine love, which is identical with God, into man, man only then is really man, when he is one with God, who is love. Through lack of love we manoeuvre ourselves into being godforsaken and without God man becomes inhumane. Therefore God himself became man, to be able to give his divine love to us again, if we accept it in the forgiveness of our sins. God himself, being love, is the truly humane principle in person, which makes mankind real humans, the crown of divine creation. This is why God became man, to make mankind truly humane, to restore us as images of God. This is what we celebrate on Christmas and this is what I wish us all, that we may become renewed humans through our unity with God in love.

I am sure, that you are also interested in the progress of our charitable projects:

OUR CARE CENTRE is becoming A REALITY!!! The construction work has started on 30 October 1995. The building is in progress and the cut- and-fill process is almost complete. I must say it is very exciting to be able to walk around the foundations and dream. It is quite a daunting prospect and one wonders how it will all work? It is going to take many hours of further planning, decision making and implementation to get it running. Of course the fund raising will be an ongoing task. 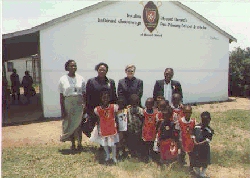 OUR Pre-primary School & Crďż˝che celebrated THE FIRST "GRADUATION" 5th December, 1995 saw the "graduation" of our first six children who leave our school this year. They are Thandeka Mathaba, Njabulo Mathaba, Nokukhanya Mthethwa, Mbali Shange, Sandile Khumalo and Sindiswa Malishe. We wish them God's blessing as they continue their education in junior school. May He guide them and protect them.

OUR CLUB FOR THE AGED FLOURISHES. Our members in this club have been entertained and many friendships have been forged. Through the hospitality of many local people we have had many informative and fun filled outings and meetings. One highlight was the visit to the Amatikulu Fish Hatchery. We were given a detailed rundown of how the fish are spawned, hatched and raised. I do not think any of us realised what a specialised job this is. Jenny Kirkland demonstrated how hats and mats are made from plastic carrier bags, by people who are unemployed. These items are then sold and so they are able to support themselves. Margaret Hiza won the most original hat prize at our "Spring hat parade". Margaret's daughter Dr. Hiza our local veterinarian brought her Weimaraner "Lothy" along with her when she spoke to us about pet care. Other members gave demonstrations on baking, knitting, crocheting, calinetics and aroma therapy. Of course bingo is an all time favourite and it was difficult to get our members to stop. Thanks to Joyce Buss for taking on the job of the caller. Granny Hawthorn suggested that all the members should utilise their time by making articles for sale during the year. This was a resounding success and a total of R1593.00 was raised for our Care Centre. A special thank you to Granny Hawthorn and all the people who contributed. I am sure many of you have received the Christmas cards which were recycled by our members. This was another stout effort by all to raise funds. Although some members left Mandeni, our numbers have remained fairly constant. Hopefully we will recruit new members in the new year. 1995 ended on a high with our end of year party. What a spread we had!!!

A TRUE STORY by Nokuthula Thabethe: One very hot Zululand Saturday morning, sitting under a tree trying to cool off and rest her weary legs, was an old lady. She had been shopping for her many children and grandchildren. She only had a few Rand and I am sure she was contemplating how she was going to stretch the little food she had bought far enough to keep hunger under control. There was a friendly young face. A young girl with a small baby, also looking for a cool place, sat down beside her in the shade. She began to chat. The old lady and the young girl become quite friendly. Suddenly the young girl remembered that she had not bought food for her baby. She asked the old lady if she would look after her daughter while she made her way through the throngs of people. She really did not want to take the baby back into the very hot shop. The old lady was in no hurry and was quite happy to wait for the young girl to return. She waited.... and she waited. Finally the shops were closed and the mother of the beautiful baby girl had not returned. It dawned on the old lady that this infant had been abandoned into her care. She went to the police to report the incident and then took the baby home to her already large family to feed and care for her. The baby did not gain as much weight as she should have and seemed to be constantly ill. The old lady took her to the local clinic. The baby seemed to be undernourished and therefore they referred her to our feeding scheme. The baby was examined and proved to be HIV positive. We continued to support the old lady not only with food, but with advice and encouragement - until the unfortunate death of the baby. This is surely an example of Christ's love, shown through the old lady.

The Malnutrition Clinic has been operational since 1992, giving milk and porridge to malnourished babies. Presently we are monitoring 33 babies, including 7 pairs of twins. We hold a clinic every fortnight. Each baby is given 2 packets of milk and two packets of porridge. They are weighed each month and examined for any possible medical problems. The mothers are advised to continue breast feeding as long as possible; the correct way of preparing the feeds; the right age to start solids, (stressing the importance of a balanced meal). The mothers are also encouraged to take their children to the local clinic for immunisation against Polio, diphtheria, whooping cough, tetanus, measles and Hepatitis B. Babies who have problems other than feeding are referred to the appropriate services. e.g. people with social problems are sent to the social workers.

INTERNATIONAL AIDS DAY. 1st December, 1995 was international AIDS day. We tried to make the local community aware of the dangers of becoming infected with the H.I.V. virus. This was done through a pamphlet, written in both Zulu and English, being handed out at the schools, shops and in the mail boxes. Posters have been given to the local industry to put on their notice boards.

Mission work means always preaching God's love in word and example. We thank you for all your support through your letters, donations and co-operation. Lots of our help would be impossible without your help. May God reward you abundantly!

Forward to my next circular

Back to Father Gérard's Homepage